This is Elympics First-Person Shooter tutorial: part 10. In this part we’ll be controling the gameplay by managing players’ scores. See: Part 9.

The gameplay you’ve created in your project will last forever: players will fight with each other, and when one of them dies, they’ll respawn after a given time. The next step is to add a script that will control the game, i.e. track the statistics of the players and end the match when one of them scores a defined number of points.

Start by creating a new class, PlayersScoresManager.cs, which will be responsible for the gameplay aspects described above.

The task of this class is to control and manage the points of each player. To get information about all of them, you’ll need references to PlayersProvider once again. In addition, you’ll need to specify the maximum score leading to the end of the match. You’ll be able to modify in the editor.

The scores (ElympicsInt type) of individual players are stored in a synchronized ElympicsArray. This class also stores information about the id of the player who won the game. Thanks to the use of the ElympicsInt synchronized variable, in the future, the components responsible for displaying the summary screen will be able to use ValueChanged to display information about the winner.

Just like in the case of the PlayersProvider class, this class also has the appropriate IsReady flag and provides an event so that other classes that want to use PlayerScoresManager.cs can be sure that the script is fully initialized.

First, the PreparePlayerScores() method is called to fully initialize the synchronized playerScores table.

Then, the SubscribeToDeathControllers() method is called. In this method, you iterate over all the players in the scene to be able to assign your manager’s main method, ProcessPlayerDeath, to the local event of each player’s DeathController component.

Before you increase the score of a specific player, you’ll need to check whether the received arguments have the same value. If that’s the case, it means that the player self-inflicted damage leading to their death. Such a case should not generate a point. On the contrary: if the player causes their own death, they lose a point.

After modifying the points of this player, you check whether this player has reached the amount needed to end the game (in the case of increasing the points value). To avoid errors caused by incorrect prediction, this action is performed only on the server. If the player reaches the required number of points, their id is saved to the WinnerPlayerId variable, and clients synchronize this value with the next snapshot they receive.

Just like in the case of PlayersProvider and PlayersSpawner, the last step is to create an Empty Game Object in the scene and add the newly created script to it with references: 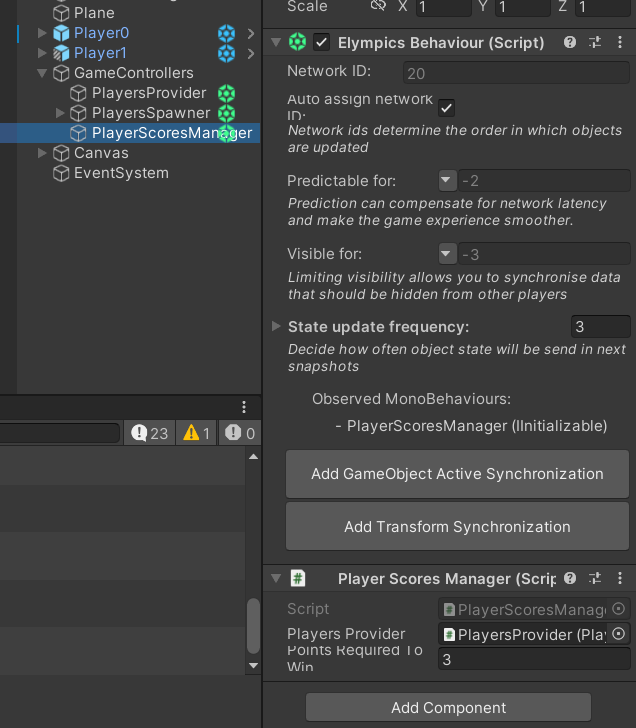 If you want to test whether your class works correctly in its current state, you can add a simple Debug.Log to your code that will write on the server information about a possible modification of the WinnerPlayerId variable:

And the winner is…

After defeating one of the players a certain number of times, you should see the following message on the console:

Now, your game monitors the gameplay. The script you’ve created will be a good starting point for subsequent scripts responsible for displaying the scoreboard and the proper end of the match.

In the next part we’ll expand controling the gameplay by adding start and end of the match. 🔧