Providing listeners for network or game events and managing the game lifetime.

Gameplay implementation is just one of the steps in creating a perfect game. There are many other factors that affect player experience. One of them, staying in close relation to gameplay, is maintaining the match lifetime and the currently playing squad.

Make sure Elympics Behaviour component is attached along with your implementation of IServerHandler, IClientHandler or IBotHandler. Otherwise, the callbacks won’t be called!

Both of these methods are coroutines returning IEnumerator. The correct way of running them is using Unity StartCoroutine wrapper.

The methods above are client-only actions: make sure to call them only if IElympics.IsClient is true.

Normally, there is no need to call ConnectAndJoinAsPlayer manually as it is done by Elympics when client instance initializes. This behavior is customizable using “Connect On Start” checkbox of Elympics Client editor:

ConnectAndJoinAsPlayer and ConnectAndJoinAsSpectator consist of three steps: they establish a connection to the game server, then perform user authentication and finally register a player in the match. Completion of each step can be tracked by implementing the following methods from IClientHandler interface:

along with their corresponding error handlers:

Meanwhile on the server, only one callback is executed:

ElympicsPlayer passed here is used to distinguish a player from others in player data array passed as the only parameter of server initialization callback (described below).

A match can be also left using IElympics.Disconnect(). If the match isn’t ended immediately by the server, players can rejoin it.

The method above is a client-only action: make sure to call it only if IElympics.IsClient is true.

As matches with players missing have a great chance of becoming unplayable, you may want to close the server after some delay (using the action described in the next section). To make sure the server is notified about such an event, you have to implement IServerHandler.OnPlayerDisconnected(ElympicsPlayer player).
As before, received in-match player identifier can be used as an index to player data array passed in server initialization callback.

After a client disconnects from the server, it runs its IClientHandler.OnDisconnectedByClient().

As non-finished games take up resources, ending a match is a crucial step. Game server lifetime is currently limited to 24 hours, so no game runs indefinitely. But surely you don’t want your players to wait a whole day until they can play again. Or a 5-minute match to cost you much more than planned.

With ending a game being such an important task, SDK provides a default server handler which closes the match automatically as soon as the first player disconnects. Read more below.

The method you need to call is IElympics.EndGame(). Depending on your circumstances, you can pass an optional parameter of type ResultMatchPlayerDatas containing match results.

The inclusion of ResultMatchPlayerDatas object is essential if you want to take advantage of intelligent matchmaking (using Elo rating or machine learning) or other score-related services provided by Elympics. The data can be also passed to your backend (if configured).

ResultMatchPlayerData stores arbitrary byte[] GameEngineData in a format specified by developers and float[] MatchmakerData with its structure defined by Elympics. MatchmakerData must contain two elements:

You can read more about the matchmaker in the next chapter.

Of course, there are some situations when a match ends with no meaningful results to send to the matchmaker, e.g. not all players joined the game to begin with. In such case you should call EndGame() with no arguments.

When a match ends, the following callbacks are run on clients (in the order listed):

“Half Remote” development mode doesn’t currently support the two events listed above. However, the lifetime of a local server can be manipulated freely.

OnDisconnectedByServer is only run at the end of a match. Despite what the name may suggest, there is no possibility of kicking a player from an ongoing game.

As mentioned earlier, it’s really important to end a game correctly. This is why Elympics prefab includes DefaultServerHandler which closes the match if any connected player leaves. It also calls EndGame() if not all players join the game in the first 30 seconds of server lifetime.

The handler outputs logs to console when players connect and disconnect and when it decides if the game should be ended.
Messages such as “Waiting for game to start” could make you think that games are started using a method analogous to EndGame(). However, that is not true. The start of a server means the start of a match.

If the behavior described above is not suited for your game, you can disable the built-in implementation of IServerHandler.

Before disabling DefaultServerHandler make absolutely sure at least one of your implementations of IServerHandler calls EndGame() properly.

When it comes to disabling script components and deactivating objects, DefaultServerHandler is an exception. All other synchronized behaviors remain unaffected by such settings unless you implement a similar explicit check in your code.

DefaultServerHandler class is a good starting point for implementing a custom server lifetime guard. After copying the code, you can modify it to suit your needs.

When a game instance starts, an initialization callback is run with game and player data passed as the only parameter. To retrieve the data you can implement appriopriate methods of IServerHandler, IClientHandler and IBotHandler interfaces.

The data is stored as instances of InitialMatchPlayerData. The class consists of the following properties:

There are two points at which you can input GameEngineData and MatchmakerData for your game to use during the initialization process.

The first is when you call ElympicsLobbyClient.PlayOnline(). This method accepts four optional parameters, including float[] matchmakerData = null and byte[] gameEngineData = null. Check out the next chapter for more details. 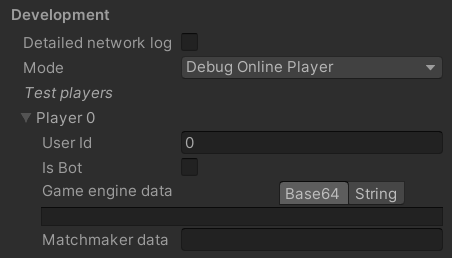 The second approach requires using your own backend. The definition of needed endpoints can be found in External Game Backend integration chapter, along with instructions on how to configure the back-end address to be used by your game.

The one last callback to describe is IClientHandler.OnSynchronized(TimeSynchronizationData data). It is called every time a client synchronizes its clock with the server (using NTP protocol).

An implementation of this method can be used to track the condition of network connection using information from TimeSynchronizationData object passed as the only parameter. For example RoundTripDelay property can be displayed as “ping” in an in-game UI.